A project by: Somerville College 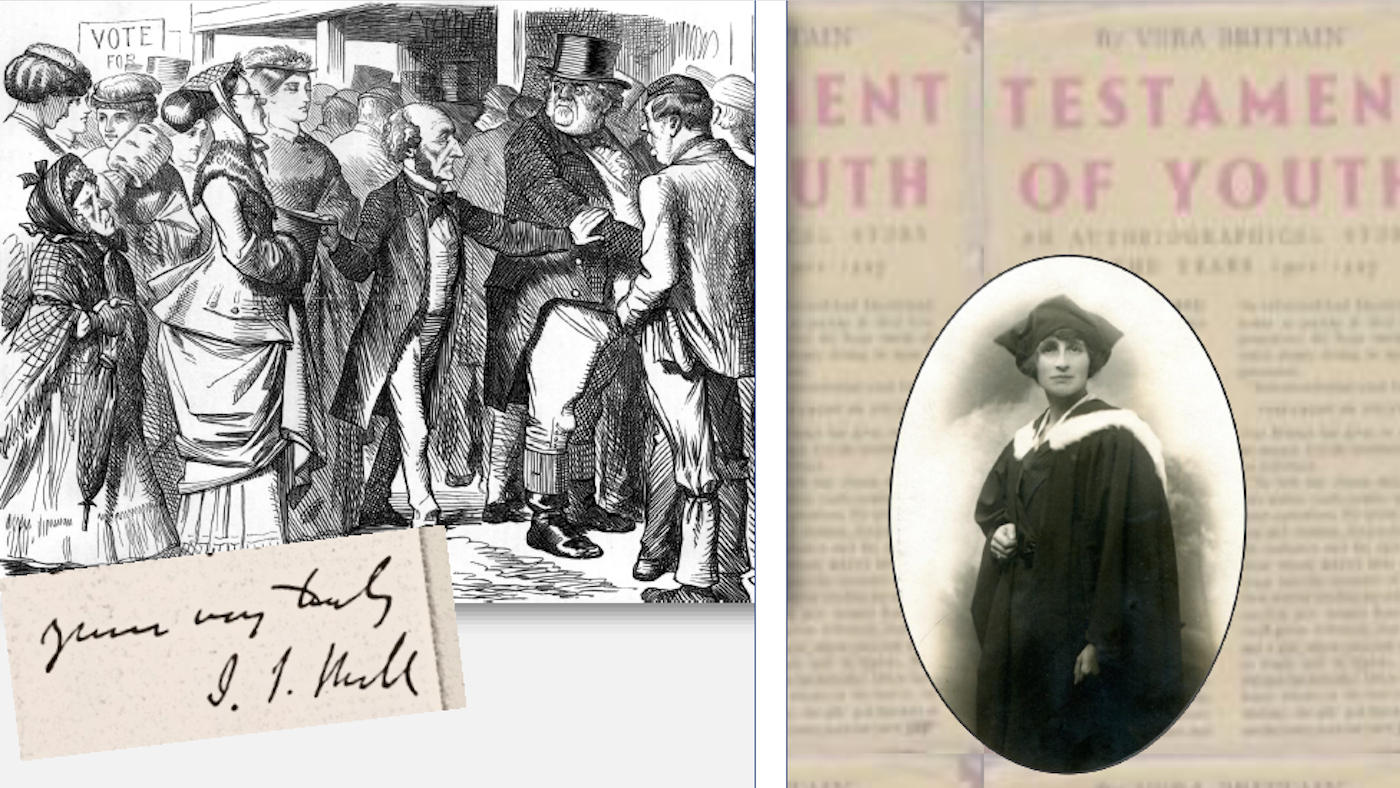 Thanks to your support, we were able to purchase a first edition of Vera Brittain’s first publication Verses of a VAD (1918) in near perfect condition along with three letters and three postcards written by Vera Brittain concerning a variety of public speaking engagements between 1962 and 1966. These items will be added to our existing Vera Brittain collection of photographs and letters given to the college by her biographer Paul Berry.

We also purchased seven letters by John Stuart Mill, six of which have not been published.

Albany Fonblanque, was a radical journalist and editor-proprietor of the journal The Examiner, and correspondent with John Stuart Mill. George Armstrong was a Unitarian minister had had a few papers published by Fonblanque. With the help of Albany Fonblanque his paper Church and State Fallacies is forwarded to John Stuart Mill for consideration for publication in the London & Westminster Review. It was apparently never published.

• A letter to Edwin Arnold then leader writer, and later editor of the Daily Telegraph dated 1866. The letter declines an invitation to contribute an article to the Daily Telegraph on the grounds that he is at ‘open war’ with the paper concerning its support for John Eyre, Governor of Jamaica and his violent suppression of the Morant Bay rebellion.

• An unpublished letter to Pastor Louis Rey of Avignon asking for an introduction to MM Dollfus in Mulhouse to see the work that the philanthropic factory owners had done for the benefit of their workers.

• And an unpublished letter to William Cabell who was at the time Senior Clerk in the Secret and Political Department and Assistant Secretary at the Board of Control for the East India Company.

All these items will be on display in the college over the coming months and will be available for visiting researchers.

The Vera Brittain items we purchased: 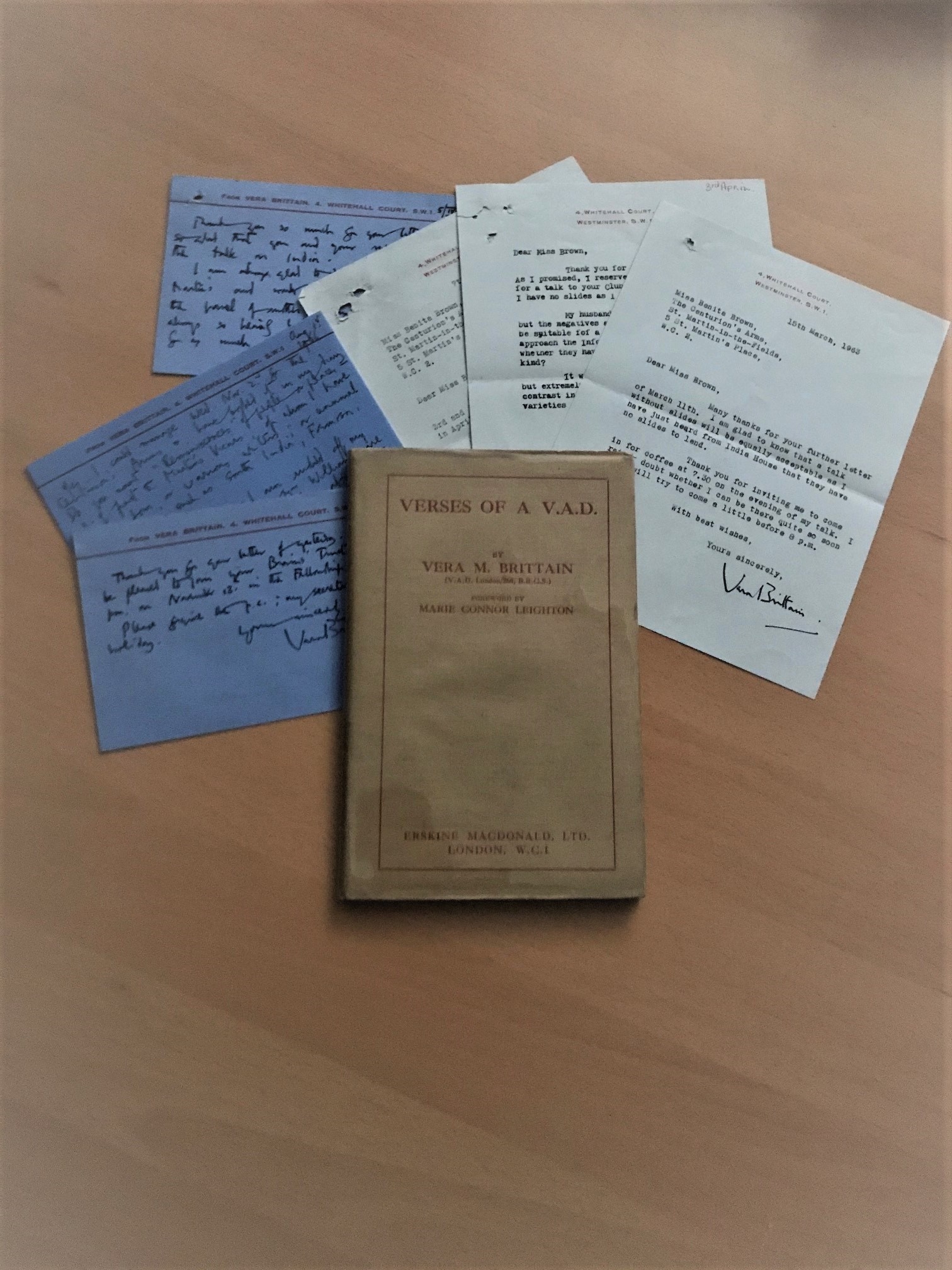 The Mill Items we purchased

Thank you very much for your generosity and for your interest in our Collections and history.

As you will have seen, this campaign raised an impressive £16,685 from 44 donors. This is a fantastic result, and as we have raised more than our original target, we are able to  purchase the items outlined in the original pitch plus:

A letter in French requesting an introduction to M Dollfus, a philanthropic factory owner, known for his industrial paternalism (unpublished), a letter to William Cabell, Senior Clerk at the Office of the Examiner of India Correspondence at the East India Company where Mill was a senior official (unpublished), a letter to Edwin Arnold detailing his antipathy to 'The Daily Telegraph' over the Jamaica question (published).

Thank you once again, and we will be in touch at the end of the summer with an update and any rewards associated with your donation.

The Somerville Library and Development Office

We are absolutely delighted that we have exceeded our first target of £15,000 to enable us to enhance our Mill and Brittain collections. Thank you so much for your support.

This means that we can not only purchase the items outlined in our original pitch but can look to acquire more items by Mill that are currently being offered for sale.

If we can raise a total of £17,000 we can purchase all the previously unpublished letters currently available. Among this collection are a letter to Mill’s French publisher concerning proposed recipients of his work 'August Comte and Positivism', a letter in French requesting an introduction to M Dollfus, a philanthropic factory owner, known for his industrial paternalism, and a letter to William Cabell, Senior Clerk at the Office of the Examiner of India Correspondence at the East India Company where Mill was a senior official.

If we can reach £21,000 we can also acquire some previously-published letters which are also extremely interesting. These include a political letter to Edmund Beales concerning the choice of Liberal candidate for Kilmarnock, a letter detailing his antipathy to 'The Daily Telegraph' over the Jamaica question, and one in French to another French publisher concerning copies of his books translated into French.

These ten additions to our small collection would mean that we have a significant extra resource for Mill scholars, enhancing our existing important holding of his London library.

With warm wishes, and thanks,

Enhancing our Special Collections: Brittain & Mill
Your message has been sent.