FANTASTIC BEATS: Get In the Pink to the Edinburgh Fringe!

A project by: In the Pink A Cappella

This project received pledges on Wed 28 Jun 2017
Follow Become a helper
Wave your magic wands and transport In the Pink to the Edinburgh Festival Fringe this August!

We're taking our show to the Edinburgh Festival Fringe, and we need your help!

In the Pink are an all-female a cappella ensemble made up of students from Oxford and Oxford Brookes. Formed in 2004, In the Pink has seen many a transfiguration over the years, but this year has has marked a colossal turning point in the energy of the group, who progressed through to the finals of the Voice Festival UK 2017 in large part due to their inspiring Girl Power vibes. 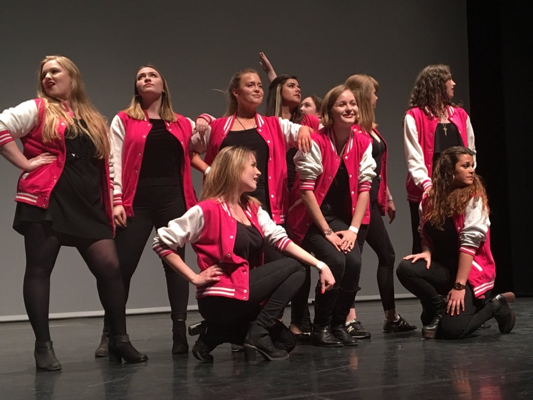 In the Pink performing at the Voice Festival UK semi-finals this April.

Fantastic Beats will take the audience on a journey through student life in Oxford, searching for the music and the magic in the most everyday of occurrences. After receiving that all-important letter from Hogwarts – or in the girls’ case, from the University Admissions Office – what to do when the daily grind turns excitement into tedium? Fantastic Beats promises to re-inject the magic into the monotonous by seeking out the music in every aspect of student life, from the library to the club.

Check out a preview of our launch night here: http://oxfordstudent.com/2017/05/17/preview-fantastic-beats-find/

Edinburgh is expensive: besides travel, food and accommodation costs, groups have to fork out for venues, technicians, registration and other administrative fees. In previous years, this has been entirely funded by the girls themselves, retrospectively subsidised, but never covered, by ticket sales. This year, all the girls have already contributed hundreds of pounds each to account for these costs, and you may well have seen us performing at various events around Oxford to raise funds, but we still have a way to go to make the show happen.

Furthermore, this year we've teamed up with Oxford Against Cutting, a local charity working tirelessly to tackle female genital mutilation in and around the city. We hope to take this partnership with us all the way to the Fringe, where we will continue to raise awareness through flyering on the Mile. However, we would love to be able to contribute funds, too, which is why we have pledged half of all our profits from the show to Oxford Against Cutting. Check out their website here: https://www.oxfordagainstcutting.org

However, in order for this pledge to be helpful to those most vulnerable, we need to actually make a profit. This rarely happens for student groups at the Fringe due to immense overheads, which your money will go towards covering.

We want to make it clear that your donation will NOT directly fund Oxford Against Cutting - rather, it will make it more likely that In the Pink will make a profit from ticket sales at the Fringe, half of which has been pledged to the charity, the other half of which will help to reimburse the girls for travel costs, accommodation during rehearsal week, living costs and other expenses.

We've put our heads together and come up with some magical rewards for ALL donations over £5. The more you give, the better they get. How much do you want that In the Pink branded Varsity jacket?!

Follow us to find out how we're doing- we'll be doing shout-outs for the duration of the campaign!

If you have any questions at all, feel free to send us an email at inthepinkoxford@gmail.com

We would also like to thank our very own Somerville girl, Helena, for facilitating this project, and Somerville College themselves for the use of their wonderful platform, Hubbub. Keep an eye on our Facebook page for more information coming soon!

Project Creator:
In the Pink A Cappella
View Profile
Contact

FANTASTIC BEATS: Get In the Pink to the Edinburgh Fringe!
Your message has been sent.

Thank you, your report has been sent.
FANTASTIC BEATS: Get In the Pink to the Edinburgh Fringe!